1) Thirteen people this year, counting me:

Mom (who is 50; also, this is the occasion for our being in the Big Apple for the Macy's 150th Anniversary parade; Dora was the crowd favorite judging from the swelling chant Dora, Dora, Dora!); Peter, my younger brother who is old enough now to take part of the Alcohol (the sheer volume, daily replenished, was an event in itself); my older brother Guy, Teacher of Euro Games; Khary, my husband's Jamaican ex-roommate; Reneé, who works for the Zimmerman Agency doing PR and, for touring the Roosevelt Hotel, got her entire vacation paid for (and yes, the accent mark is supposed to be on the wrong "e"); my aunt and uncle, Ree and Jules, respectively, celebrating their 29th anniversary and finding nothing at Tiffany's to spend $20,000 on; Stephanie, their daughter, whose avatar is a wolf; my husband, Ernest, who brought long johns and waterproof jacket to aforementioned parade and wore neither (his nose reddens just at the tip--a round, distinct pink, like a doll's!); Reneé's parents, Leonard and Kathy (and just as a side note, couples really are comprised of discrete people, here unfairly lopped together by lazy journalism), who are bested in contests of conversation volume (oh, ambiguity) and silliness only by their daughter; and David. David is a random kid from Auburn L and K picked up at Young Frankenstein (they initially met him at the airport) because he'd booked a trip to NYC without making plans (or having money) for a place to stay. Lucky kid. Got to partake of our fabulous mélange of Thanksgiving Day entrées and sides.... and dessert, newly minted by me, for baked pears, mmmm!!

4) And dessert. Mom revisited her first-ever birthday cake which had been in the shape of a turkey, only this time it was an ice cream cake--which went very nicely with my Brandy Baked Pears. (I had been craving them all week long, impatiently watching the organic fruit stands as the Bartlett pears slowly softened and yellowed to their most aromatically delectable; I'd been planning to just eat them all! Juicy sweet.) 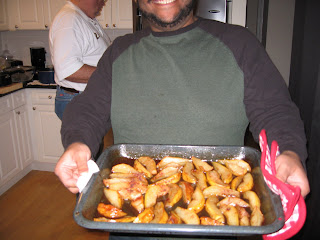 Preheat oven to 450. Core and slice pears in eighths. Set aside. Drizzle maple syrup into the bottom of the pan, in sweeping back-and-forth motions. Add butter and water. Heat in oven until butter melts. Tilt pan to stir. Add pears, turning them in liquid until all surface areas are completely covered. Do not stack. Pour brandy equally over all pears. Dust with half the sugar and cinnamon to taste. Bake on center rack for 15-20 minutes. Remove and turn each pear. Dust with the rest of the sugar and more cinnamon. Return to oven for 20-25 minutes, depending on ripeness of pears. Broil for 5 minutes. Serve.

Many thanks to Reneé and Kathy for cutting, and to Khary for extracting pan from hot oven.
Posted by Unknown No comments:
Email ThisBlogThis!Share to TwitterShare to FacebookShare to Pinterest
Newer Posts Older Posts Home
Subscribe to: Posts (Atom)