I know you are not much for all this seriousness, but bear with me.

I was reading a book the other day and getting excited about revisions: Blueprint Your Bestseller by Stuart Horwitz.

I came to the first action step, and in rushed anxiety.

Why? Why all this fear just thinking about doing something that once brought so much joy?

Then I realized: When I'm doing the work of a writer, I am outside my body. Writing, I'm in my head, talking to people who don't exist, working in worlds that aren't real.

Dear writing bracelet, I have spent the last 12 months intensely focused on being present in my body to recover from certain traumas from which I used to escape by writing.

Now, writing is terrifying. To write, I must intentionally extract myself from the present. What if I don't come back? What if I can't come back? I don't trust myself to be careful and to listen and to return . . .

Writing bracelet, you're going to help me. 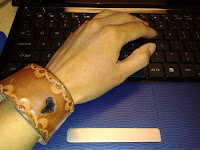 When I slide you on my left wrist -- in my culture the left hand is reserved for promises -- you will give me permission to leave the present, to leave my body. To enter a new world.

With you, I will be safe. I will be true to the many Parts of me who each needs nurturing and care.

When I slide you off my wrist again, your departure will free me to return to this body I have learned to love. To this place where I am safe.

Perhaps, I will not need you forever. But for now, my muse thanks you.

Sincerely,
Lora (and all her many Parts)

This concept of the self being not one but many, and my reference to "Parts," draws on Dr. Richard Schwartz's IFS therapy model. It's helped me process a lot of hurt and trauma. It's still helping! The model was intuitive enough for me to work through on my own, without professional guidance. I read this book.
Posted by Unknown 4 comments:
Email ThisBlogThis!Share to TwitterShare to FacebookShare to Pinterest


“Then would you read a Sustaining Book, such as would help and comfort a Wedged Bear in Great Tightness?”
-- Pooh-Bear

"Right, and who are you?" The pixie-haired, androgynous-looking woman turned her sharp brown eyes on me after nodding the others into her home. Her well-muscled shoulders were bare beneath a leather tunic, and out from under camouflage cut-offs poked a pair of strong legs girthed in muddy military boots.

Rebel's home was carved out of a hill, like a hobbit's. Except mammoth. The size of a museum.

I cleared my throat and said in a pert, small voice, "My name is Lora Rivera. I am an aspiring writer." I smiled and extended my hand. She declined to take it.

To be clear: I was dreaming.

We entered through the waterfall and passed into her home.


Everywhere, I saw art, living, twisting, branching art crafted of plant matter and earth, windows made of spun spider silk, light spilling in from great cracks between smooth boulders, slender shafts of warm sun filling the halls of dirt and foliage with the yeasty golden smell of growing things.

In the real world: After the State of Arizona cut our funding, I was given notice of my separation from Aviva Children's Services where I have been writing children's biographies for the past three years.

My divorce will be final April 28, in a month and a half.

Without family, I am suddenly living alone in a newish town, with an upside-down house and a great load of debt. No credit. No job. I am not writing.

In my dream: I traced a finger along the ruddy walls as I weaved through the corridors after this fiery but quiet young woman -- Rebel was her name. She was me, I was her. But I felt small in her home. I longed for her to come see the library where I lived. The glossy wood floors, the dustless windowsills on which sat blue vases holding single white Rock Flowers. The ever-sharpened pencils.

I wanted her approval.

My hand snagged a root that was growing wildly out of a wall. A large portrait fell to floor, cracking the frame. Rebel swiveled.

Rebel squatted beside me. The portrait was of a young woman, an artist-hunter whose face was set in profile. She had a bow drawn to her cheek. The arrow was a feather-fletched pen.

"The frame's broken," I said. My shoelaces were untied. Shame spread over my cheeks and neck.

Crumbled clumps of grassy earth lay at Rebel's feet. She picked up two clumps, and handed one to me. Her nails were short and grubby, but smooth and well-trimmed.

"I'm an aspiring writer," I repeated, sure of only that one thing. Where had the portrait gone? I felt lost, confused. I held out my portion of dirt. "What . . . ?"

Rebel took the second handful and pressed it to the wall. Sweetly, I thought. Her hand to the wall, as if to a lover's cheek. The clump of earth stuck there. The wall sucked the dirt into itself and seemed to murmur, seemed to pulse, grew still again.

I obeyed. The blank wall felt warm under my fingertips. It felt alive. Not like a pencil, a bit of dead wood veined in gray graphite, capped with rubber.

"You didn't make any of this, did you?" I gestured around at the mossy arches, the leafing vines forming figures like statues in the doorways.

Rebel smiled tightly. "I don't fight what I know I can't win. You coming? The wall'll figure out what it wants to be soon enough."

"You just gotta stop staring at it," she said.

I am an aspiring writer. The mantra was comforting but felt out of place.

Rebel looked exasperated. "You like people breathing all over your creative process? No? Didn't think so. Come on, then."

I turned toward the soft sound of her leave-taking boots. Mushrooms and flowers spiraled up around her feet. I thought, from farther on, I could hear the sound of water trickling among rocks. The quiet was rich, sleepy, and I felt it like a full stomach, like a truth, or permission.

I couldn't remember what I was. What I was supposed to be.

I went forward into the living house, into its warm glow.