Interview with Monica @Love YA

Thank you, Monica, for a taking the time to do an interview with me!

You can can find more info about how I started at CGLA and what I'm looking for on her blog Love YA.

Monica B.W. is a YA writer represented by Michelle Wolfson of Wolfson Literary Agency.
Posted by Unknown No comments:
Email ThisBlogThis!Share to TwitterShare to FacebookShare to Pinterest

... At some point we have to realize they're never going to be perfect, and we just have to let them go.

Meaning, throw them to the wolves and let them stand on their own two feet... 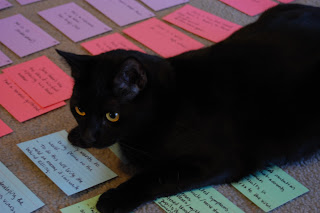 As an important aside, do your cats love sitting in the middle of your complicated, color-coded, hand-written plot outline??
Posted by Unknown 1 comment:
Email ThisBlogThis!Share to TwitterShare to FacebookShare to Pinterest

Everyone knows that agents get perhaps hundreds of new queries a week, and it's a race against time to read, reply, request, assess, and offer before the next agent makes a bid for your promising new author's loyalties.

What I don't know is how they do it! After being officially added to QueryTracker.net (thanks so much, Patrick!), I now receive 5-10 new subs a day. Which is wonderful, don't get me wrong. I love seeing all these imaginative stories and waiting for that something that's solid and has spark. And 50-70 a week is nowhere near the hundreds other agents receive...

And yet, I wonder how I'm going to get through them all. I certainly will. Now worries about that. My system previously has been to tag New Subs and Archive immediately for my "batch days," at which time I read and respond to them all. But I find that I get tired quickly this way, with so many, and I start reading for the rejections, which is obviously unfair to writers and bad for my own treasure hunt. I think I'm going to switch to a daily batch system - That way I can stay fresh for new writers and not feel too bogged down by the sheer number of New Subs.

Thanks to all who've sent my way! And for your patience as I work out the kinks. Keep learning. Keep writing. It's good to be in this crazy, exciting process together.
Posted by Unknown 3 comments:
Email ThisBlogThis!Share to TwitterShare to FacebookShare to Pinterest

My husband is always ranting about it - the new generation of shortspeak that has us parsing sentences like "txt u 2mwro dnt wat up" (from my cousin's Facebook).

In my sojourn through Egan's Goon Squad (I know, I know, I'll stop talking about it soon, but it is such a good book!), I stumbled into her slipstream story "Pure Language." I read my husband the passage below to assuage any fear that he's the only one nervously watching the transformation of language via social media.

[Rebecca's] new book was on the phenomenon of word casings, a term she'd invented for words that no longer had meaning outside quotation marks. English was full of these empty words--"friend" and "real" and "story" and "change"--words that had been shucked of their meanings and reduced to husks. Some, like "identity," "search," and "cloud," had clearly been drained of life by their Web usage. With others, the reasons were more complex; how had "American" become an ironic term? How had "democracy" come to be used in an arch, mocking way?


I don't know myself whether we should be nervous about this transformation of language any more than about the changes bound to occur within populations, species, philosophies, and doctrines. I do believe we should be watchful, however, and try our best to participate while we parse not only the vaguely English messages tweeting across our screens, but also what it means to live in our present world as it barrels toward a future we are all helping to create.
Posted by Unknown 2 comments:
Email ThisBlogThis!Share to TwitterShare to FacebookShare to Pinterest

"Pilgrimage" up and running

Check out my newest story, "Pilgrimage," edited by the wonderful Jennifer Taylor, Fiction Editor for damselfly press.
Posted by Unknown No comments:
Email ThisBlogThis!Share to TwitterShare to FacebookShare to Pinterest

Here There Be Goons

Is it somehow indicative of my taste in literature that a renowned reviewer in The Washington Post would disparage the story I simply adored? (There are many excellent stories in  A Visit from the Goon Squad, and it would be a shame to miss them. Please, please read the difficult and wonderful "Out of Body.")

"Not every leap lands with equal precision, of course. A madcap comedy involving a genocidal dictator who's eager to improve his public image strains against Egan's sophisticated wit."

Perhaps Jennifer Egan sacrifices a few of those sophisticated darlings for the above-mentioned piece of fantastic (in every sense) comedy, but nuggets remain of her rippling themes of idealism, loss and regret, frustration, and the desire for meaningful existence encapsulated in relationships. Heartbreakingly as these themes are illustrated in other stories, they nevertheless compound to lack, over the course of the first half, a degree of realism, even to border on the absurd. Must every character shoot her or himself in the foot or head (depending on where the gun's angled)? As if the game is fixed? As if, indeed, this menacing goon squad visit is inevitable? (The metaphor is Time, and such a visit is certainly inevitable, though its fallout, I'm arguing here, may not be.)

But in "Selling the General" - the collection's sacrificial lamb, it would seem, from a literary standpoint (unless one counted the slide story, which I found both touching and a bit overkill) - these themes thumb their noses at Time's goons, who have come and gone. And may still come, but at least neither regret nor resignation frames this denouement. No plaintive snowfall of the heart makes this story sigh with elegance. "Exactly!" you might exclaim. "It is inelegant, unworthy of Egan's painstaking refinement." Ah, but the story's elegance is in its placement - it sits demurely in the middle of the book; making no lasting statement of importance with its presence that first or last position might have made; eyeballing the tragedy surrounding its purely fun, satisfying, wonderful own sense of the absurd. The flip side of the absurd. Not the real side mirroring life. Reality remains somewhere . . . should I say it? . . . in the middle.

Doubtless, Egan couldn't have pulled off "Selling the General" without the other stories as anchors to its buoyancy, but must we say because it is different, because it doesn't conform to certain constructed "literary" standards, because it looks its goons squarely in the eyes and barks a hoot of laughter, that it's inferior? Let's not. I say, let's cheer for it and love on it a little, before taking a deep breath and plunging into the second half of the book.
Posted by Unknown No comments:
Email ThisBlogThis!Share to TwitterShare to FacebookShare to Pinterest
Newer Posts Older Posts Home
Subscribe to: Posts (Atom)