Alas, I've been on vacation and haven't been able to blog.

But I promise I have a good one coming up!

Stay tuned this week for "The Motivation Equation." Tweaked for writers who suffer from procrastination. (Don't we all?)
Posted by Unknown 4 comments:
Email ThisBlogThis!Share to TwitterShare to FacebookShare to Pinterest

1. "Hooray, I don't have to work! I can eat delicious, fascinating food and go see amazing stuff."
2. "Darn it. Writing's gonna tank. Goodbye muse -- being in close proximity to other people for any length of time freaks her out. Goodbye all writing goals (#wipmadness). Goodbye sanity."

1. Get a journal. Attractive is good. Too attractive is bad. You're gonna nasty it up.
2. Take notes in it. From the mundane to the magical. Go ahead and wax poetic over presidential balls and electric cables.
3. Stick crap in it. Hiking in Arches Nat'l Park, I was equipped with my journal, a pencil, two rolls of Scotch tape, and my camera phone (which doubled as a flashlight later on when we got lost on the ridge 7K feet up and sun slipped away).

4. Record your takeaway. Not just the experience. Later, you might remember only one or the other unless you write it down. For instance, here're a few things I took away from that hike:
a. I'm a rookie hiker at best.
b. Trails are hard to navigate. Period.
c. At dusk, one loses depth perception.
The air seems to waver, changing consistency.
d. Moons are bright! Amazing when they rise.
They rise fast. Corollary: the sun sets fast.
e. The Outdoors is scarier at night.
Especially when your hiking partner goes off
with the only light and leaves you
at the top of the ridge. Cold. Alone. In full dark. 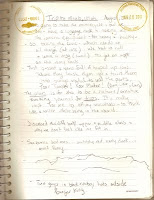 Posted by Unknown 8 comments:
Email ThisBlogThis!Share to TwitterShare to FacebookShare to Pinterest

Hello blogfellows (which associates weirdly with bedfellows -- won't be using this greeting again)!

My hubby is an aspiring photographer (see his work at Cat Photography) and has taken up the *‎*12 Months in 12 Weeks** challenge to engender creativity and hone his skills.

How am I involved? I herd cats into photogenic poses and help with lighting....

How can you help? VOTE on your favorite photo by "Liking" it on Facebook. The photo links will send you to his FB page. Or leave your fav vote here on my blog. At the end of the challenge, the photos with the most votes will become 3Cat's 2012 calendar!

**12 Months in 12 Weeks**
Each weekday for the next 12 weeks, he'll take and post a new photo.
Each week will feature a new theme, corresponding to the months of the year.
At the end of each week, the photo with the most comments, likes, +1s, etc. will be chosen for 3Cat’s 2012 calendar.

Posted by Unknown 11 comments:
Email ThisBlogThis!Share to TwitterShare to FacebookShare to Pinterest

~ Ambition ~
The Death Knell of a Manuscript?
Of the Writer?

After 2 long brainstorming sessions with trusted early draft readers, I think I know which scenes to cut. If you can imagine, I was juggling 4 different worlds and had accidentally introduced a 5th! Eek. Run. Fast. I'm definitely cutting the recent addition. And I'm cutting the 4th world, a veritable darling.
And I think I know where I'm going from here.... loosely.

My WIP is getting out of control. Too big, word-count wise. Too thick, theme-wise. Too soupy, character-wise. Too complicated, plot-wise. I'm a pantser, true, so I'm trying not to let it get to me. I'm trying to "just keep writing" until the draft is done.


I know there'll be massive editing in the future, and I'm okay with that, relishing the thought, really. But I wonder if I shouldn't go kill a few plot threads now while I still have the chance. Before the monster fish pulls my boat under and me with it.

In critique group last week, one of the gals piped up with the dreaded word "ambitious" to describe this project. That's the word polite reviewers use to talk about a book that's bitten off too much in one go, that fails at its (usually multiple and praiseworthy, utterly impossible) attempts. "My, but this book is ambitious!" she'll exclaim before slaughtering the epic tome with is Tolstoy-esque cast of characters and plotlines.

But part of me doesn't give a damn about word count or manageability (or marketability) and simply wants to see my MC through this hairy mess. But . . .

Any sympathetic or empathetic readers out there? Writers, what do you do when you're 50K words in and realize that OMG it's either me or the book? That the hook is stuck somewhere deep down -- darned thing swallowed it -- and I might just have to let go of the pole?


Posted by Unknown 15 comments:
Email ThisBlogThis!Share to TwitterShare to FacebookShare to Pinterest

Update: I'm so honored to have been nominated by three fellow bloggers!

I usually don't post weekdays, but three fellow writers have nominated me for a Liebster Blog Award! Thank you, Nancy Thompson, Amy Kennedy, and Freya Morris, for filling this blog with a happy fit of squeeing.

"Liebster," according to Google Translate, means "favorite" or "dearest" or some such in German. Pretty awesome, especially as I turned a bit Google crazy thereafter and realized that this award isn't confined to writers. Imagine: blogs exist that do not focus on the aspiring writer's journey. No way. Who'd've thought. Anyway, I'm proud to pass on this virtual tradition, spotlighting up-and-coming bloggers, to my own awardees in the spirit of community and friendship.

1. Thank the giver(s) and link back to the bloggers(s) who gave it to you. Nancy, Amy, Freya.... loads of thanks. Look forward to seeing you around the blog-o-sphere.

2. Reveal your five awardees and let them know by leaving a comment on their blog.

3. Copy and paste the award on your blog.

4. Have faith that your followers will spread the love to other bloggers....

5. And have loads of bloggity blog fun!

1. Kara Lucas at "Playing Beethoven - thoughts on life and writing"

She's an agent-repped YA writer focusing on issue-driven contemps, a shrewd editor, a thought-provoking blogger, and a fantastic friend.

2. Cara Ruegg at "An Alleged Author"

She's a writer of YA and MG, an extremely helpful blogger who astonished me with her tenacity at commenting on new bloggers' posts. It's been a pleasure getting to know her.

3. Alexia Chamberlynn at her eponymous writer blog, "The Life and Literary Pursuits of ..."

A beautiful blog, it stunned me with equally charming writing. She's over the 200-follower quota, but I've seen the max at 300, and I'm taking liberties...

A fun Twitter conversationalist and writer with a marketing agenda and a thrill for words, Jordan deserves some Liebster spotlighting!

She's a fantastic and often seductive read with topics ranging from the personal, sweet, and familial to the down-right naughty. I've enjoyed our correspondence.

Whew! And now, credit is due to Freya for the style of this post, as I flat-out lifted it from her blog. Thanks, everyone!
Posted by Unknown 16 comments:
Email ThisBlogThis!Share to TwitterShare to FacebookShare to Pinterest
Newer Posts Older Posts Home
Subscribe to: Posts (Atom)