This thing was delicious...

Sauté garlic, onion, and center cut bacon in nonstick pan with a little olive oil on med-high for about ten minutes, or until bacon crisps up. Add oregano and basil. Lots. For kicks, add crushed red pepper. Add a few handfuls of fresh chopped spinach. Cook down with a dusting of black pepper.

In another pan, boil chopped mushrooms in a little white wine with some fresh chopped parsley. Add diced tomatoes and a splash of lemon juice. Simmer until tomatoes are soft.

Combine dishes, heat through, and enjoy!
Posted by Unknown No comments:
Email ThisBlogThis!Share to TwitterShare to FacebookShare to Pinterest 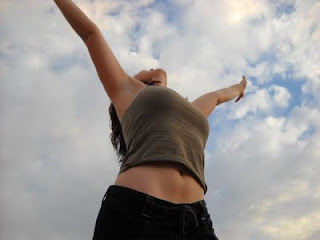 Do you get this same rush after finishing a novel? I've just completed the first draft of Starfall, my YA contemp (71K words) about the relationship between a sexually abused mother and daughter—and about wishing on falling stars.

And I got this rush.... It's the tingle you get when you see something you can't quite describe (even though you've been doing just that for the last 220 pages), a tingle that spreads inward and then outward again so that you feel like you might explode. Really, you just might.

For me, it turns into a lip-biting smile. There's history to that, of course. I used to engage in moderate sibling abuse—i.e. I'd haul off and slap my little brother when he said something I didn't like. I know, very bad, Lora. I knew it then, too, because I developed this habit of biting my lip "as hard as" I was about to hit him.

So now, any time I experience intense emotion, I bite my bottom lip.

But the rush. How I love it. Wish I could bottle it up and market it. I bet writers would buy. We need that rush from time to time. Even if the manuscript isn't perfect--When is it ever?--because it means we've trusted ourselves for long enough, stuck with a project to its end, were brave enough to hold onto rough and sometimes flat characters until they blossomed out, onto fragile plotlines until they untangled and found their way home. It means, published or no, we really are writers.

P.S. "Writerly" is a word I picked up from my undergraduate creative writing professor. Means "of or pertaining to a writer," or some such. It sounds writerly, though, so I use it.
Posted by Unknown 1 comment:
Email ThisBlogThis!Share to TwitterShare to FacebookShare to Pinterest

Next time you decide to practice multitasking techniques by reading submissions on your new smart phone while going for a 4 mile walk... check to make sure it's not going to rain halfway through.
Posted by Unknown No comments:
Email ThisBlogThis!Share to TwitterShare to FacebookShare to Pinterest
Newer Posts Older Posts Home
Subscribe to: Posts (Atom)